skip to main | skip to sidebar

And what an event it was! But I'm guessing most of you don't know what TED or TEDx is .. I didn't hear about it until my Public Speaking professor told us about it last semester! To explain it better to you, I went onto the TED website and this is what it says about it ..

TED is a small nonprofit devoted to Ideas Worth Spreading. It started out (in 1984) as a conference bringing together people from three worlds: Technology, Entertainment, Design. Since then its scope has become ever broader. Along with the annual TED Conference in Long Beach, California, and the TEDGlobal conference in Oxford UK, TED includes the award-winning TEDTalks video site, the Open Translation Program, the new TEDx community program, this year's TEDIndia Conference and the annual TED Prize. The annual conferences in Long Beach and Oxford bring together the world's most fascinating thinkers and doers, who are challenged to give the talk of their lives (in 18 minutes). Our mission: Spreading ideas.
We believe passionately in the power of ideas to change attitudes, lives and ultimately, the world. So we're building here a clearinghouse that offers free knowledge and inspiration from the world's most inspired thinkers, and also a community of curious souls to engage with ideas and each other. The TED Conference, held annually in Long Beach, is still the heart of TED. More than a thousand people now attend -- indeed, the event sells out a year in advance -- and the content has expanded to include science, business, the arts and the global issues facing our world. Over four days, 50 speakers each take an 18-minute slot, and there are many shorter pieces of content, including music, performance and comedy. There are no breakout groups. Everyone shares the same experience. It shouldn't work, but it does. It works because all of knowledge is connected. Every so often it makes sense to emerge from the trenches we dig for a living, and ascend to a 30,000-foot view, where we see, to our astonishment, an intricately interconnected whole.
So what's TEDx?

It's an independently organized TED event, and it happens at a local level. What happens at each TEDx event depends greatly on the individual organizers. Events can be held in homes, workplaces, schools, universities or public theaters. Events may last just an hour or extend to a full day, consisting of a dozen people or several hundred. Some TEDx events will focus solely on recorded TEDTalks. Others will include short talks from live speakers. What all TEDx events have in common: + TED's format of short, carefully-prepared talks on a wide range of subjects to foster learning, inspiration and wonder -- and to provoke conversations that matter + Inclusion of at least two recorded TED talks + Lack of a commercial, religious or political agenda + Free admission (although a small contribution toward costs is permitted) + A short introductory video in which TED Curator Chris Anderson explains the TEDx program (see below)

This was hands-down THE best event I've been to, and I'm proud to say I was there to witness the first ever TEDx Dubai! Not only was it the biggest event of its kind, it was also the first of its kind in Dubai .. 20 amazing speakers who had us captivated the whole time .. I left the house at 8am and left there at 6.30pm .. and it was worth being there the whole time! It was a well-organized, exciting conference and I hope that I'll be in TEDx Dubai 2010!

I also found out I tweeted about 80 tweets about the whole thing today lol .. It was great, the whole twitter community was buzzing with TEDx Dubai! Some of my tweets to give you an idea of how it was ..

@ TEDx Dubai!! The atmosphere here is amazing.. Can't wait for the event to start! #TEDxDubai
RT @tedxdubai: TED not a conference, but a platform for sharing ideas... (Bruno Giussani) #TEDxDubai

Different views from around the world.. What's right and what's wrong? Is there situations which can be judged? Mohammed Gawdat @ #tedxdubai

"If you're intelligent, we can't seduce you with our ways" Leo Laporte #tedexdubai

I want to sit in the red chair!!!! #tedxdubai @jamesED_me, how about you let me do that next? :D *you'll see that in a bit lol*

We believe that design is about impact .. ! Paul Bennett is amazing! #TEDxDubai
Have the guts to take your dream and make it real (Bennett) #TEDxDubai "Dream + Success = Happiness" #tedxdubai

RT @tedxdubai: Sometimes you have to go after what you are passionate about even if it by yourself. #tedxdubai

LOL! "Put THAT in your stereotype shisha and smoke it!" Jamal Abu-Wardeh #tedxdubai

"My greatest feat must be that I'm the only Middle Eastern to go to Beirut and come out with money!" LOOL Dr. Naif Al Mutawa

RT @tedxdubai: The Dubai we have today is a city that got inspired by the sea...Ernst Van Der Poll #TEDxDubai

RT @algergawi: #tedxdubai "If this education system has failed all of us, how do you expect it to educate rurals?" Masarat Daud

RT @tedxdubai: How do we change the distorted image of the Arab World in the West? Educate. Joke. Reach. (Bashar Atiyat) #TEDxDubai

"Were reaching 4 the stars & we might land on the moon, but who knows? It might start with a journal" Khulood Al Atiyat #tedxdubai
"I will apologize for not being a good public speaker, but I will not apologize for being a good artist" Samar Jodha #tedxdubai RT @tedxdubai: Biophotonics (Abed Ayyad) #tedxdubai

#tedxdubai is over. It was an intellectual blast. Its gonna be annual. RT @Liallena: I'm on inspiration high right now, #TEDxDubai was more than awesome, I think I'm gonna need doses of this stuff to survive. <3>TEDx Dubai one word: Phenomenal! #tedxdubai

And that's only part of them .. 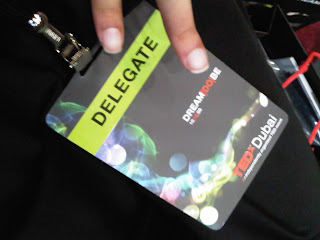 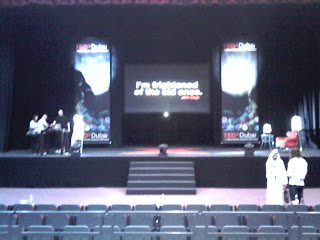 The stage before the start of the event! Me and my friends got prime seats! 4th row, right behind the sponsors, and in the exact middle :D 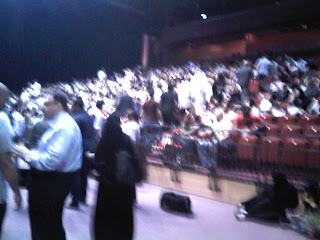 The place filling up after the second break .. 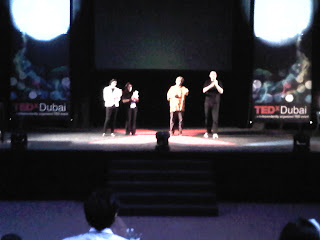 The end of the event, both coordinators on the stage .. Thank you for making it amazing! 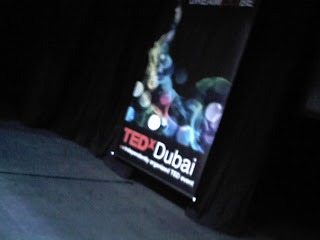 Onstage .. One of the TEDx Dubai posters .. 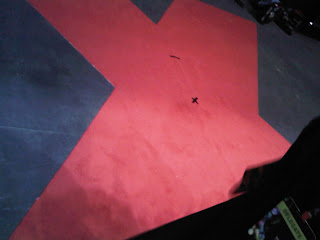 X marks the spot! The X on the middle of the stage, with the little X marker .. 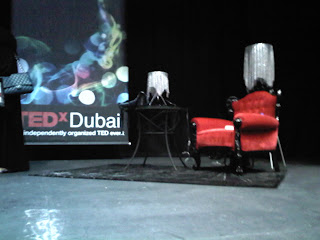 THIS IS THE RED CHAIR! It's on the side of the stage, great for first-hand view of the speakers.. I did get to sit in it in the end lol .. 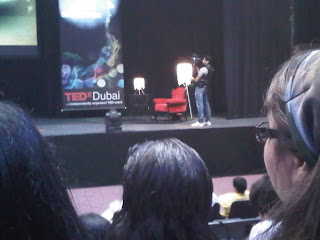 This is what it looked like from where I was sitting ..

Sorry for the bad-quality pics, they were all taken by my BB ..

Anyone who can get into TEDx should come at least once! It's too good to miss! Ideas worth spreading!

Posted by FingerPrint at 8:01 PM

best time everr!!!
i got to sit in that red chair !

ONE OF MY BEST DAYS EVER !

seriously kan shay 56eeeeeer ... for those who missed it "U WILL REGRET IT" :p

Dear Author unlimited-limits.blogspot.com !
I join. It was and with me. Let's discuss this question.

my cuzin was a speaker ;)

FingerPrint
"All a girl needs to stay put is coffee, chocolate, and Vogue"